Dr William Garrett AM (“Bill” to his colleagues and friends) died on Thursday 5th November 2015.

Bill was a true pioneer of obstetric ultrasound. In 1959, having recently returned from Oxford, he was appointed medical consultant to the newly formed Ultrasonics Section of the Commonwealth Acoustic Laboratory. In that role he guided the clinical aspects of the research conducted by George Kossoff and his colleagues for more than 30 years. He published one of the world’s earliest papers on fetal anatomy in 1968 and one of the first publications on fetal anomalies in 1970.

Bill was an enthusiastic educator. The annual Ultrasonics Institute/Royal Hospital for Women Course was a fixture for many years, training the majority of Australia’s first generation of ultrasound medical specialists. In 1985 Bill was appointed a Member of the Order of Australia in recognition of his contributions to medical ultrasound.

When ASUM was formed in 1970 Bill was the inaugural Vice President and he then served as President from 1972 to 1974.

Bill will be fondly remembered by all who worked with him as a wise and intelligent man, passionate about the potential of diagnostic ultrasound yet never far from his roots as a clinician. 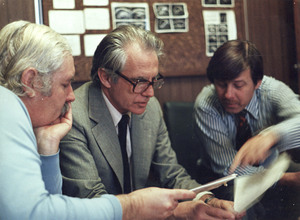 Family and friends of Bill are invited to celebrate his life at St Georges Church 245 Glenmore Road Paddington at noon, 17 November 2015 and after at St Georges Hall Paddington. A private cremation will be held.

No flowers please, however donations to the Benevolent Society or St Vincent de Paul’s Matthew Talbot Hostel appeal would be appreciated.